On Sunday, Croatia and Belarus did their job right of the #EuroVolleyM Qualifiers as they stamped their tickets to the final round of CEV EuroVolley 2021, securing a 3-2 and 3-0 victories over the Netherlands and Norway respectively. After the last day of play in all the pools, all the teams that will be joining the top Europe squads in September became known - Portugal, Slovakia, The Netherlands, Greece, Bulgaria, Turkey, North Macedonia, Latvia, Spain, Montenegro, plus Croatia and Belarus are the twelve big winners that will lock horns for the trophy in the 'Ultimate Volleyball show of the year'. 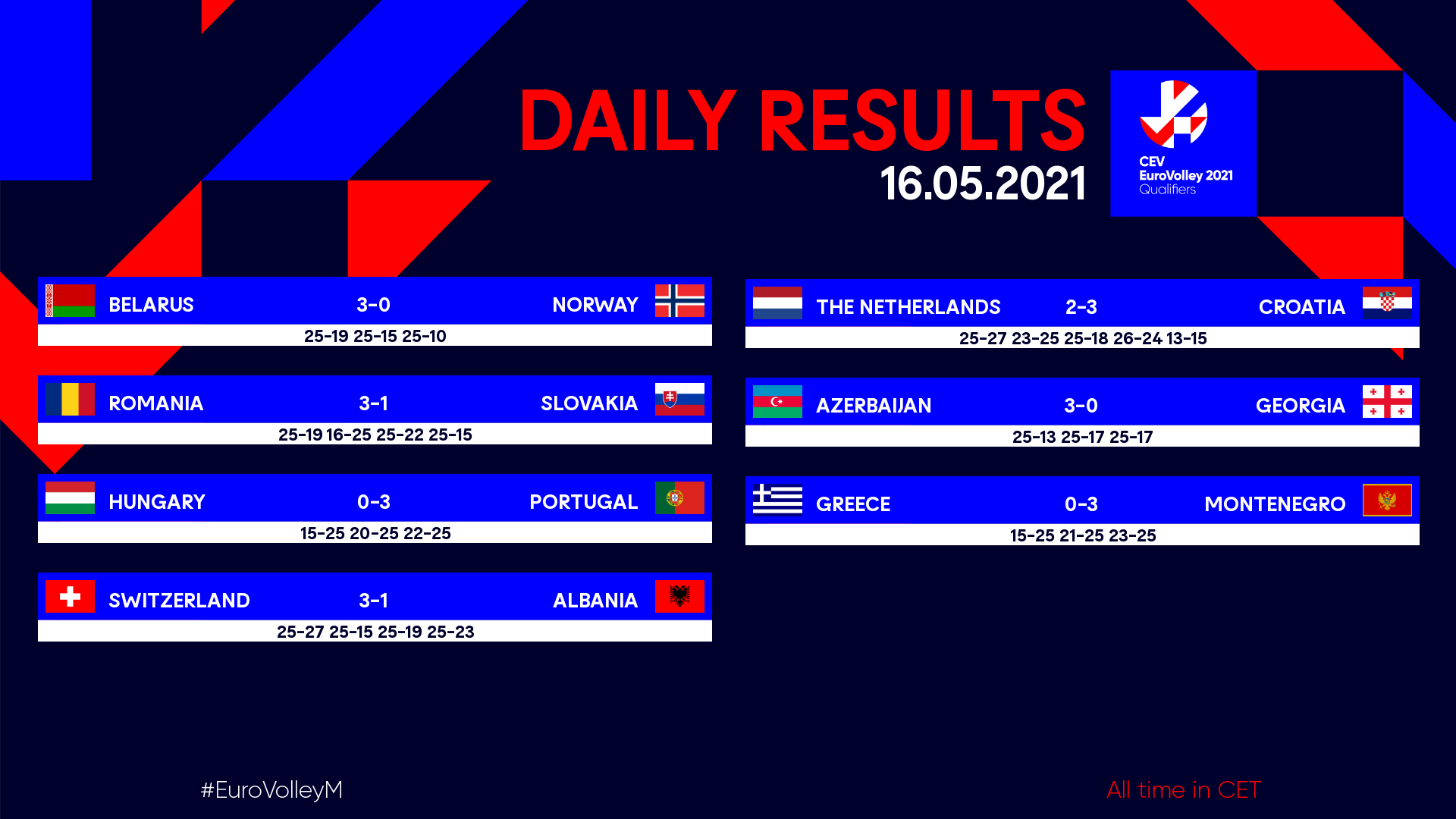 In what can be called the match of the day, the Netherlands and Croatia delivered a real Volleyball spectacle in Pool A that lasted more than two hours (131 minutes). In a match, full of turnarounds, the Croatian players emerged victorious after a real fight in all five sets, and record two important points in the final standings in Pool A that help them keep their hopes of reaching the Final Round of CEV EuroVolley 2021 alive. Both, the Dutch players and Croatia showed high level Volleyball skills, but the slightly better performance on block and on the serving line helped the team from the Balkans to claim the victory. Croatia took the first two sets but the Netherlands showed fighting spirit and coming back, brought the match into tiebreak. In a nail-biting fifth set, the players around Emanule Zanini got back on track and congratulated themselves with the victory. 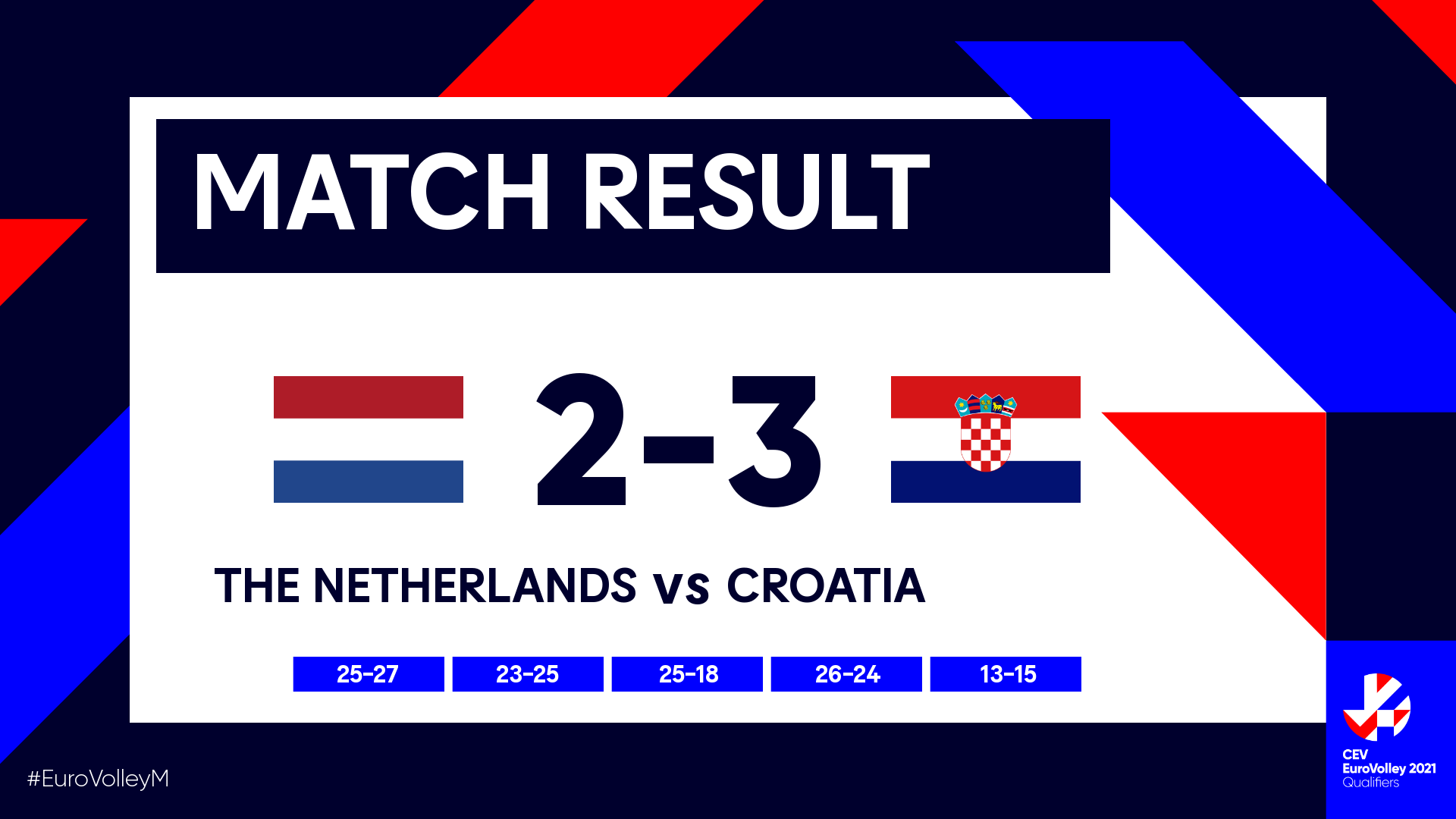 "We wanted to win, we wanted to play a good game and prepare also for VNL. It's a pity we couldn't win but the main goal is achieved, and we are very happy for going to the Finals of #EuroVolleyM"

Wessel Keemnik
Player of the Netherlands

- The Netherlands started better in the first set with Fabian Plak making some decisive contributions for his team to take the lead. With captain Tsimafei Zhukouski on the serve, Croatia got closer to the score but the players coached by Roberto Piazza built again a comfortable point difference. Croatia delivered a great comeback in the last minutes of the set, Ivan Zeljkovic with an ace tied the score for 24-24 and inspired his teammates to emerge victorious from this set.

- The second set was started with a point for a point race, too, but it it was Wouter Ter Maat from the Netherlands who took the responsability and scoring three consecutive times, helped his team to take the lead at 12-9. Croatia got quick back on track, while Trentino's star Nimir Abdel Aziz also entered the court to help his teammates. However, speeding up with 15 winning spikes, Croatia took the 2-0 lead.

- The Netherlands took control of the game in the third set, with leader's Ter Maat performance on attack becoming the key to the Dutch success.

- Croatia were close to a comeback in the fourth set when Ivan Raic performed at top level and equalised for 19-19. Ter Maat responded on the other side of the net, but the Croatian players weren't giving up. However, some better play in the decisive moments helped the Dutch reach the tiebreak.

- Kruno Nikacevic was performing good on the attack in the beginning of the set. Dutch leaders, Ter Maat and Nimir recorded errors on the serving line in decisive moments, but Ivan Zeljkovic returned the favour. However, Croatia showed great team spirit and took the win.

"I cannot express my feelings, we are very happy. We did a great job, I want to thank all the people in Croatia for believing in us. Congratualtions to the Netherlans, too"