Norway stun Hungary, Greece, Montenegro, Slovakia, the Netherlands and Portugal with a huge step towards the Finals

The #EuroVolleyM show continued on Friday with fans all across the continent following the action on EuroVolley.tv.

In Pool G, Norway claimed first win disappointing Hungary at 3-1, and thus grabbing first three points in the competition for a spot at the #EuroVolleyM Finals. The Norwegian players started on the wrong foot in the match, losing the first set, but afterwards found their rhythm and with excellent performance on the block (14) and on the serving line (7), the players led by Tore Aleksandersen were able to seize the victory. The outcome from this match would make it more difficult for Hungary as they were aiming at the second place in Pool G, but still have their chances.

In the other match of the Pool, Portugal made a huge step towards the Finals, winning 3-1 vs. Belarus. 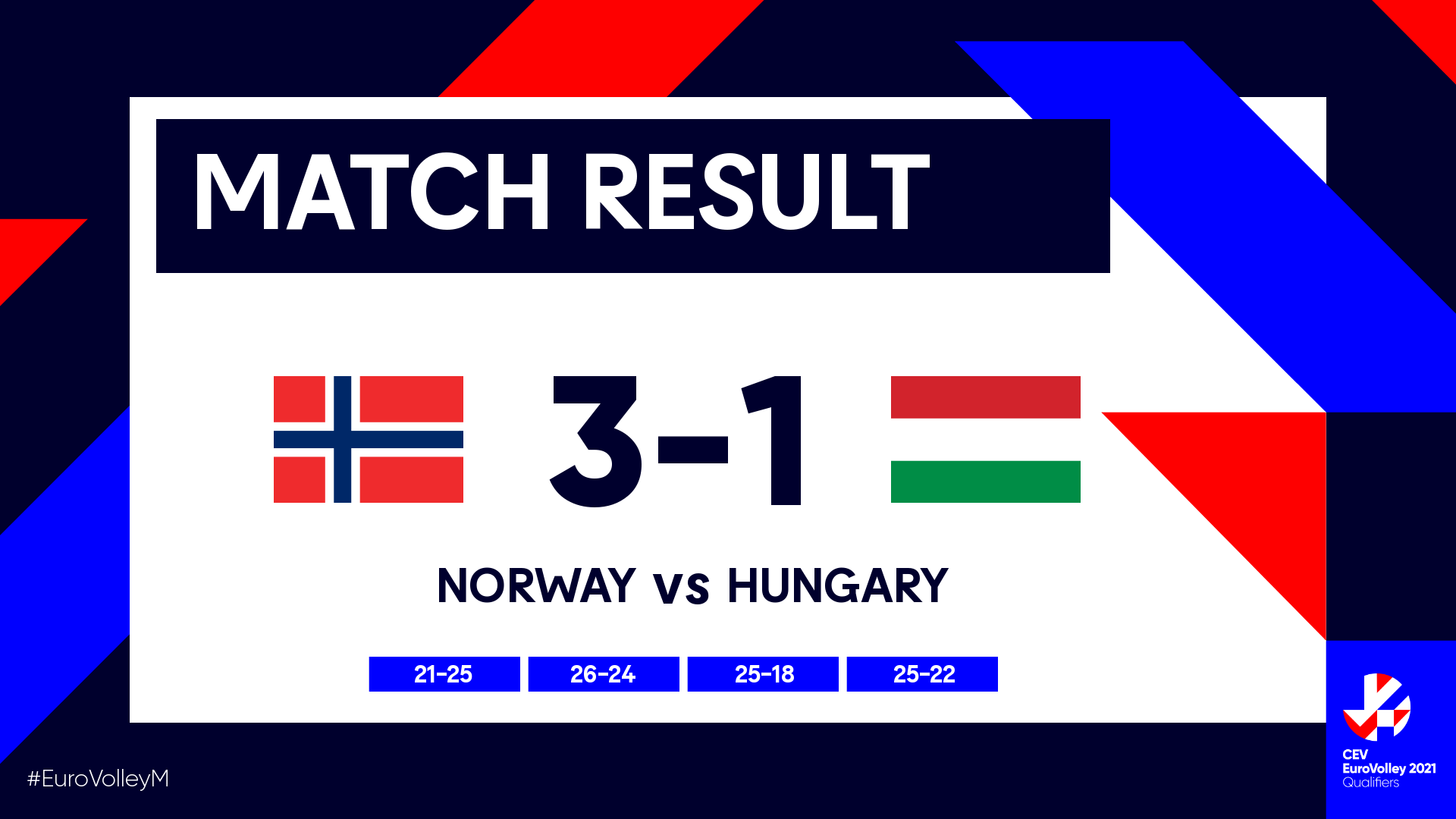 "We did a really good job today; we had to substitute many players due to injuries, so we played with a lot of young players. We fought, we showed emotion, we deserved the win. We started serving better and had some good passes; we performed good on the block, so this was the key to the success. We have two tough matches ahead."

- Setter Jakob Thelle, newly crouned NCAA champion with the Hawai's team, has Norway for the second-leg tournament and hopes for his performance were high. He didn't disappoint and controlled the play in a way for his team to emerge victorious.

- Hungary's players, on the other hand, knew before the match started, that it would be a tough one, stating that it is hard  to prepare playing against Norway, as their players always change positions.

- Norway started better in the match, with one ace and one kill block helping them take the lead. Good play by Roland Gergye helped Hungary to get on track and tie the score, to eventually emerge victorious with two aces and two blocks in this part.

- A point-for-a-point race marked the first moments of the second set, with Norway's Martin Olimstad giving it his best on the spike. It was Dániel Gacs from Hungary who was responding in style on the other side of the net.  In a cat-and-mouse game in the last minutes of the part, Norway's Jonas Kvalen found the right way and with four consecutive successful actions after the 20th point, helped a lot to his team to emerge victorious.

- Inspired, the players coached by Tore Aleksandersen, started much better in the next set, showing good skills on the serving line (two aces). They continued on performing well and with some great defence play plus five blocks secured the third set and turned things around, taking the set-lead.

- Norway maintained the level on the block in the last set, too, and although Hungary tried to bring the match into tiebreak, they weren't able to do so.

- For the winners, Jonas Kvalen helped the most recording 16 points. Krisztian Padar, with 26 points, was above all in the match.

"If we look at the numbers, we didn't play worse compared to the tournament in Hungary. The difference today was that they were able to build some point-difference, and it was difficult to come back. We will meet two top teams, now, Belarus and Portugal and our goal is to grow day after day and show some progress."

On Friday, Greece congratulated themselves with a 3-0 victory over Georgia in Pool F, making a huge step towards the #EuroVolleyM Finals. Montenegro, too, are getting closer and closer to the 'ultimate Volleyball show of the year' as they claimed a 3-1 win over Azerbaijan. In Pool E, Romania repeated their success vs Albania, this time winning at 3-1, while Slovakia outclassed Switzerland with the same result. The Netherlands lead the way in Pool A after a 3-1 win over Sweden, topping the charts in the group with nine points, and one step closer to the Finals. 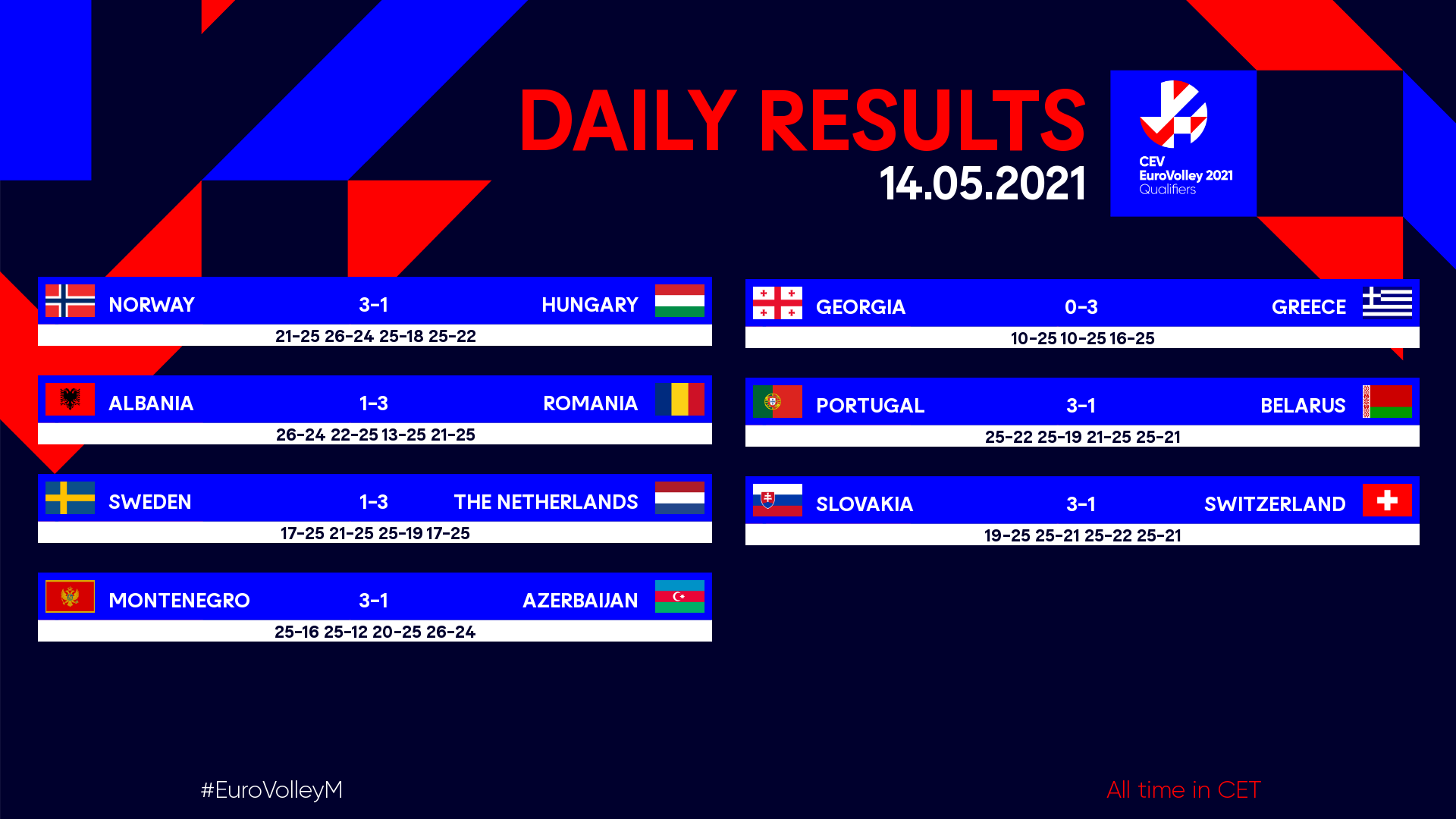