Hungary fly to the #EuroVolleyW Finals, France, Sweden, Finland, Switzerland and Czech Republic to join them

Friday was a lucky day for some of the teams that are in 'a battle' for the #EuroVolleyW tickets, and are competing in the six pools taking place across Europe.

Aiming for a spot at the Finals of the #EuroVolleyW, Hungary started in the best possible way on the first day of competition in the second-leg tournament in Pool E. Seizing a 3-0 victory over Israel, which is their fourth consecutive win at the Qualifier, the Hungarian players grab a ticket for the Final Round of Europe's elite national competition, and will join the already qualified top teams who will meet in August to decide who the best team in Europe is. Israeli's head coach, U.S. Volleyball legend Logan Tom, tried to motivate her players, giving motivational speeches during timeouts, but Israel were not able to reach the level of play of the Hungarians.  Hungary were better in all the components, but the difference was made by the seven aces scored. Setter, Zsuzsanna Tálas was awarded MVP of the match, while her teammate, the outside spiker and captain Gréta Szakmáry became top scorer with 13 points to her name.

With 11 points in Pool E, the players coached by Jakub Gluszak, maintain their first position in the group while France, who earlier today also seized a 3-0 victory, over Denmark, and secured a spot at #EuroVolleyW Finals, too, are following them with 10 points. 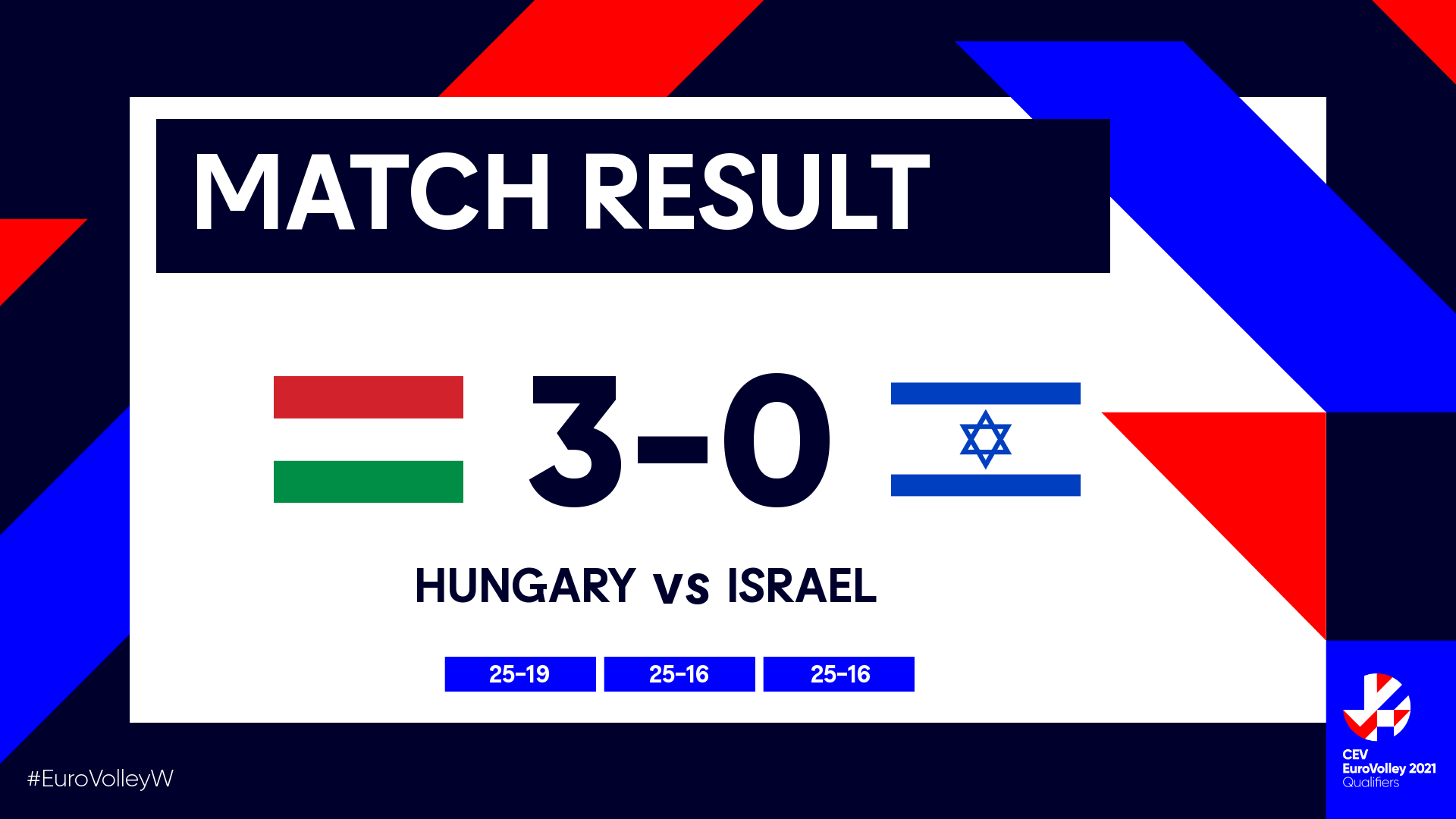 - In the first minutes of the match, it seemed that Israel could put up a fight storming out for a 6-1 lead. Hungary reacted quickly and came back taking the lead at 13-12. Coach Tom called a time out but it didn't work out as expected as Kata Török was showed her best skills in the decisive moments. Maya Dudockin of Israel tried to tie the score but it wasn't enough and with three kill blocks and an ace, Hungary opened in their favour.

- Having established the control of the game, the Hungarian players took their chances in the second set and showed skills on the serving line (four aces) and outclassing the opponent at 14-6 winning spikes, took the set.

- In the first minutes of the third set, both teams seemed to be playing at the same level (better, 6-6balls,). Israel were calmer on attack, being able to finish their , skills on the net, but Hungary weren't ready to allow any surprises in the match. Aliz Kump on the serve made it difficult for Israeli's reception (incl. an ace). With no further problems, Hungary closed in straight sets.

In the other groups, in Pool A,  Switzerland secured a spot to the Finals after a 3-1 win over Estonia. In Pool B, Sweden have a reason to celebrate, winning 3-2 at Ukraine and qualifying for the first time for #EuroVolleyW since 1983. In Pool D, Finland join Slovakia and also secure a spot at the Finals, thanks to a 3-1 win over Montenegro. Czech Republic also congratulate themselves with stamping a ticket to the CEV EuroVolley 2021, winning at 3-1 over Bosnia&Herzegovina. 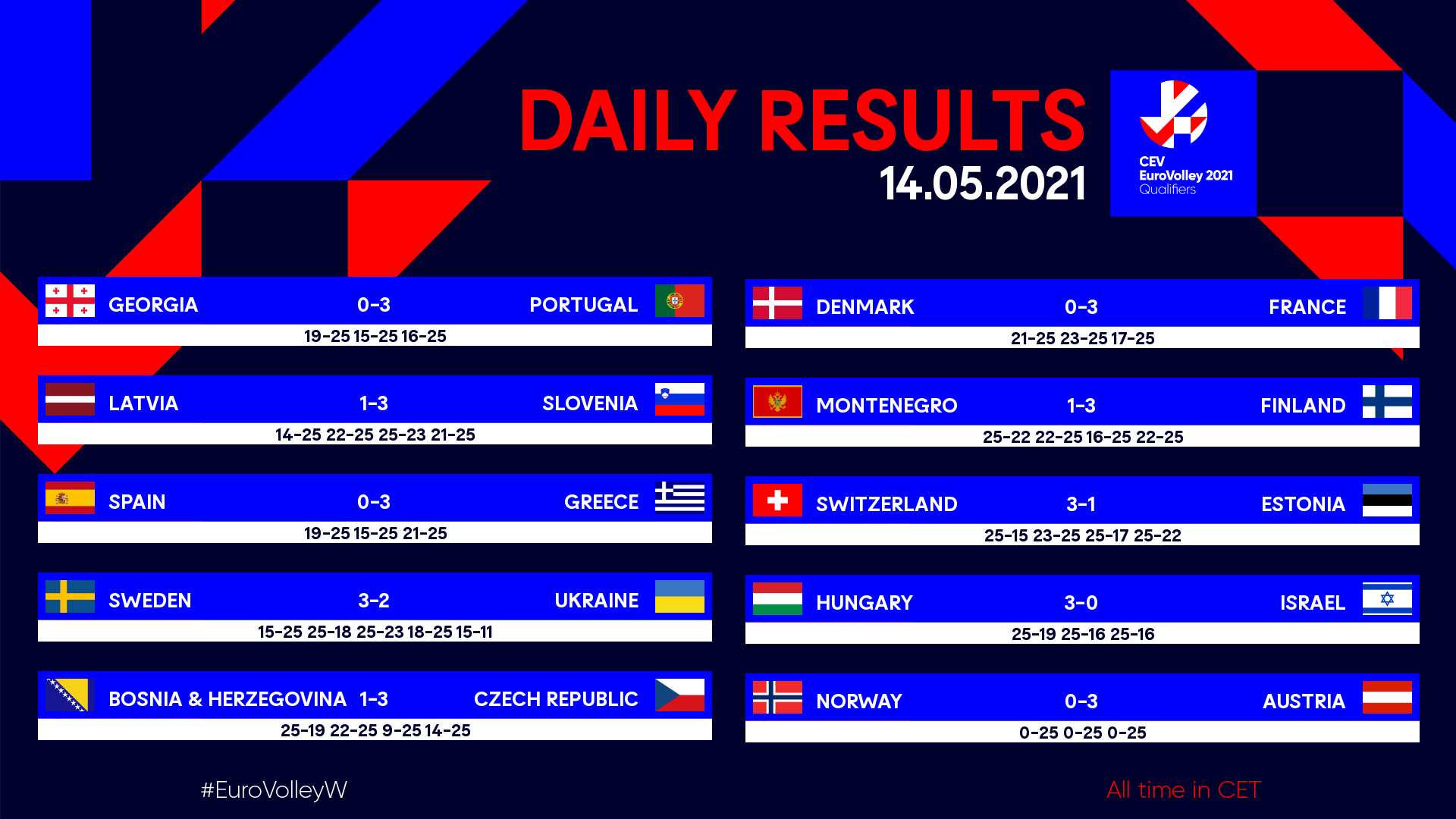