1/8 Final matches for teams from Pools B & D confirmed

Luxembourg, September 19, 2019. With Pools B and D rounding things up for the CEV EuroVolley 2019 Pool Phase, the pairs of teams for the remaining 4 1/8 Final matches are now known. After all the excitement yesterday with Pools A & C, things were much more straight forward here with the positions all known long before the final whistle was blown. 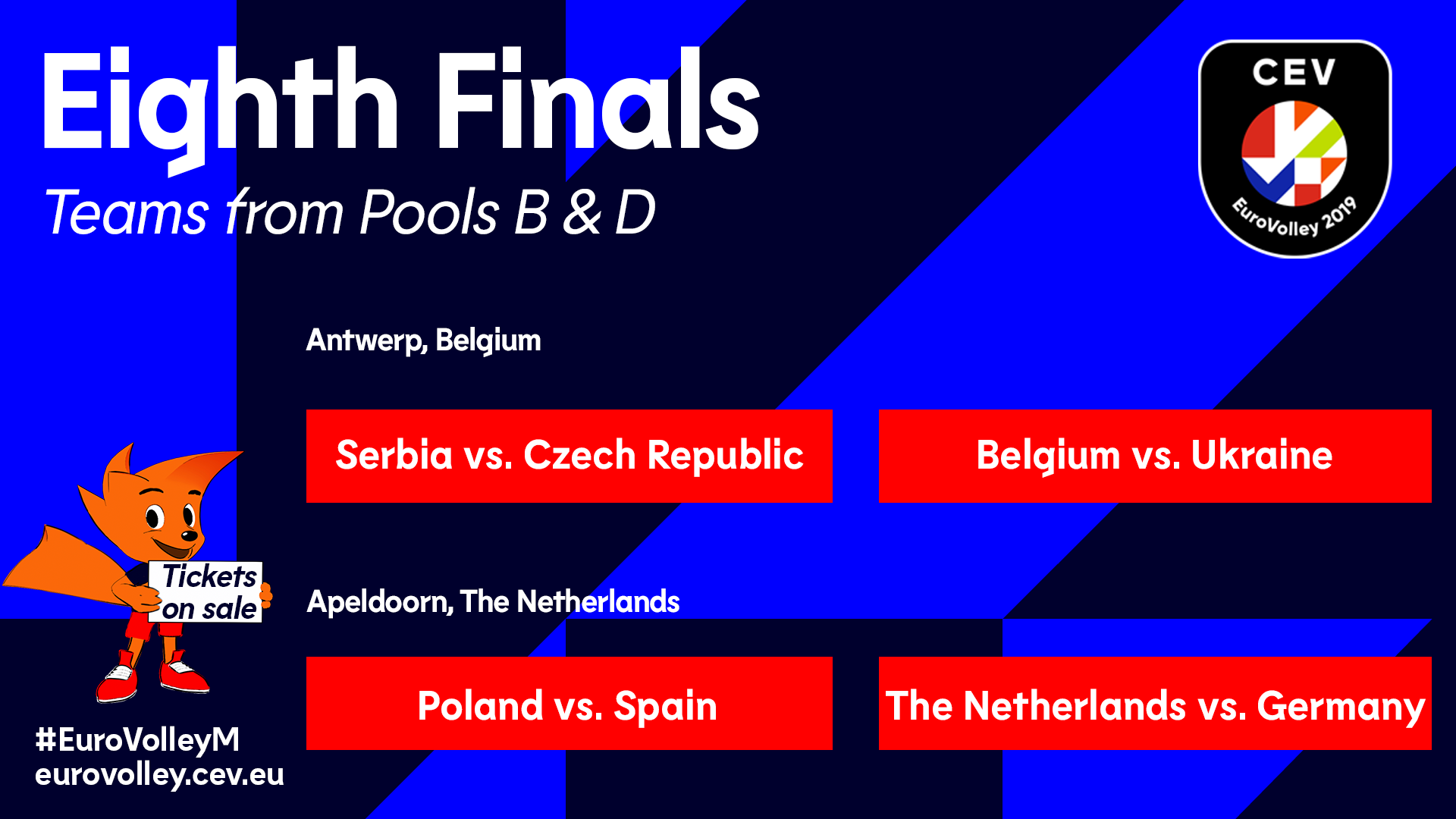 1 - Serbia – Serbia complete Poor B with a near perfect record, winning all five matches and only dropping one set to Spain on their way to securing top spot. Scoring 396 points in the process, they will be looking to continue this rich vein of form into the knock-out stages of the competition.

2 - Belgium – The Red Dragons will be quite content with their performances and results in Pool B – in particular the 3-2 win over Germany on their opening match day.  With 11 points from their 4 wins the hosts finished comfortably second.

3 - Germany – After the opening day 0-3 setback to Serbia followed by a tie-break loss to the home side Belgium, the Germans would have known that third was likely. What they would not have expected however, is that the point they got from that match was crucial to help them reach that. Also losing to Spain, it has not been the start that the 2017 silver medallists would have been after

4 - Spain – Brilliant performances in nearly all of their matches have seen the Spanish side take the final 1/8 Final spot in Pool B.  Their matches have been some of the most enthralling and they end the pool with six points and every result possible to their name, except a straight sets win.

1 - Poland – The reigning double world champions did not disappoint their fans so far, taking Pool D by storm, winning all their matches and losing only one set (25-27) in the process, in their first EuroVolley 2019 game, against Estonia.

2 - The Netherlands – Pool D hosts rested on the final day of this phase, assured of a place in the 1/8 Finals, having scored three three-point wins against Montenegro, Ukraine and Estonia but did lose to Poland (0-3) and, quite unexpectedly, to the Czech Republic (2-3).

3 - Ukraine – Ukraine lost only one match of the first four, giving in 0-3 to the Netherlands. Their participation in the eighth finals was thus guaranteed before their last match, in which they suffered another 0-3 loss, this time to the pool toppers Poland.

4 - Czech Republic – The Czechs scored two victories in the first four matches of Pool D. Winning 3-0 against Estonia was not a walk in the park (34-32 and 28-26 in sets two and three) but the points taken from the match were precious. The thrilling 3-2 upset against the hosts gave Czech Republic real chances for the top 16. In their last match against Montenegro they needed to win only two sets to qualify and did just that, with outstanding performance by Jan Hadrava (39 points, 10 aces).