The man on the mic

Lewie Lett, the English guy, whose voice excites the millions of TV viewers enjoying his commentary during the final four EuroVolley matches, “unveiled” his face to us as he took time to answer our questions about what a Volleyball TV commentator job is all about.

“It’s a constant follow,” Lewie started. “I am lucky that Volleyball and Beach Volleyball (having coached it) are my main sports. I feel like I’ve been around them since I was six years old. My dad was a player and my granddad – a referee. That, matched with preparation and commitment to following the sport day in day out is key to knowing what’s happening.” 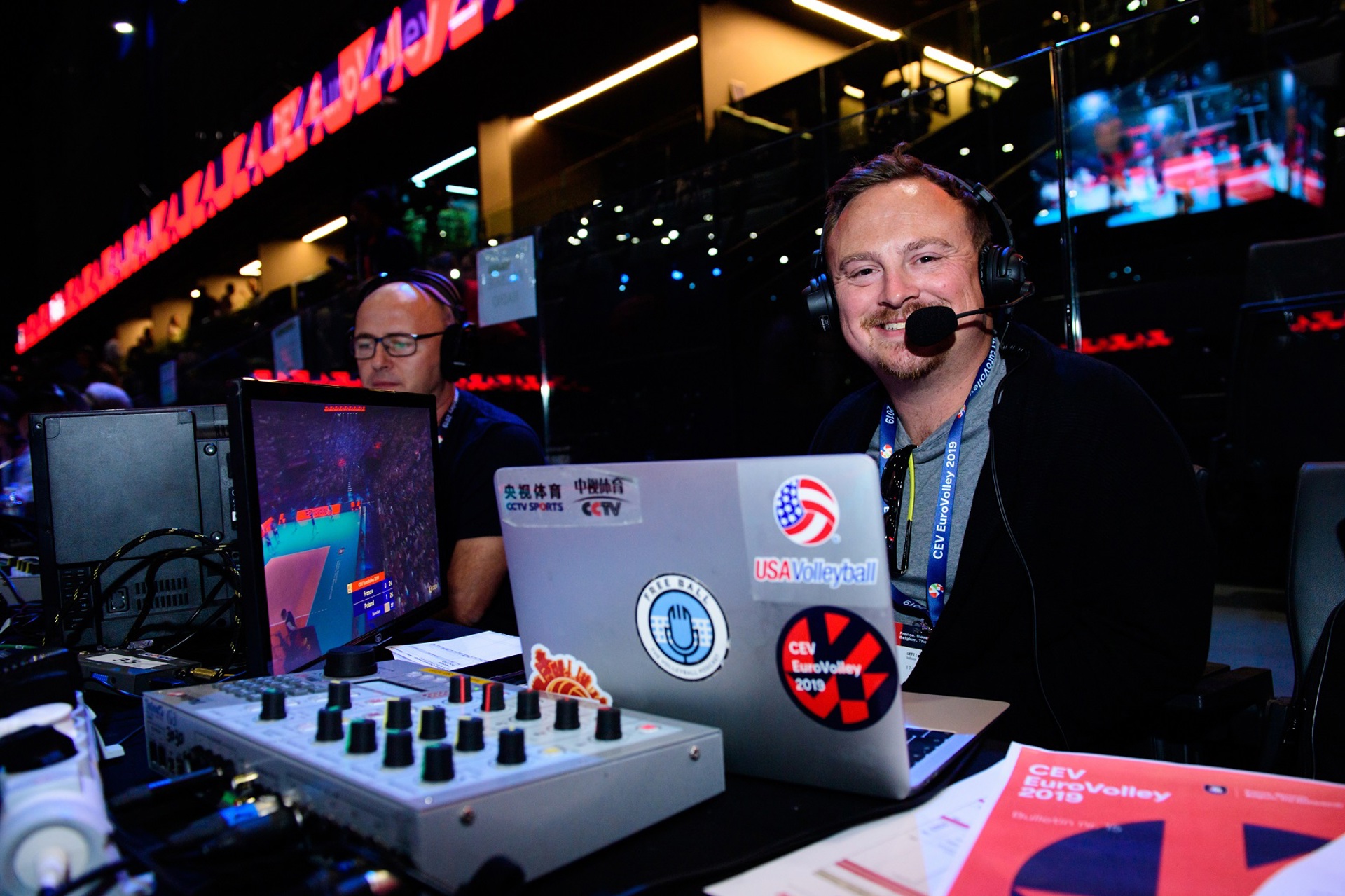 What do you do before a game?
“When I arrive at the venue two hours before, I have already prepared my notes and my intros. I grab something to eat, grab some coffee, spend from 45 minutes to an hour to write down some ideas, some phrases..., try to talk to some of the players or the coaches to get some additional information for the viewers.”

What did you do in the days before you arrived?
“I spent a week at home after the Beach Volleyball World Tour Finals in Rome, then I went to China for the Olympic qualifiers in Beach Volleyball last weekend. I came back and went to Slovenia on Wednesday. I worked the first EuroVolley semifinal there on Thursday. On Friday, I came to Paris.”

Since January of this year, Lewie has travelled to commentate in 11 countries, outside his native United Kingdom: China (three times), Czechia, France, Germany, Italy, the Netherlands, Portugal, Russia (twice), Slovenia, Switzerland and Turkey

Describe your job in one word.
“Storyteller. When you do your research before the match you can find lots of different stories related to the game, the teams and the players, which you can tell the spectators to add to the drama.”

Is your desk arranged in a specific way during the match?
“It starts off really tidy and orderly and as the game progresses and I start using things, it gets messy very fast.”

What is your philosophy in commentating?
“Knowledge and passion – gain as much knowledge as possible and try to pass on my enthusiasm to anyone who may have not seen it before.”

What is your biggest challenge?
“Trying to make a bad game sound exciting (laughs). Luckily, that’s not happening here, at EuroVolley.” 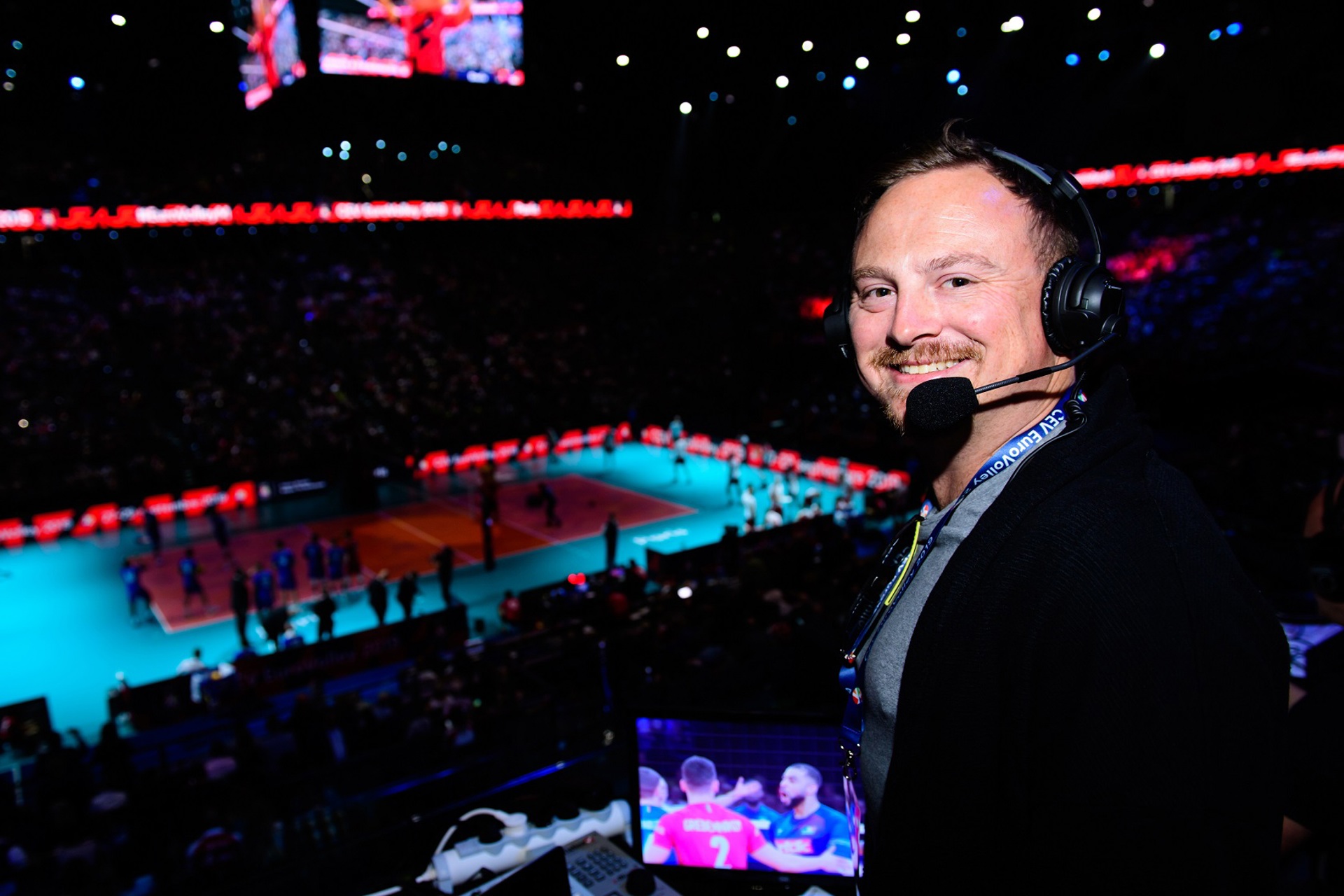 What is the biggest mistake you’ve made?
“Like it is with everything that you do, it’s a job that you learn. For example, the pronunciation of the names – I can’t say that I would get every Serbian or Polish name pronounced right, but I am trying to get it right. It’s a learning environment. I have an app that helps me with the pronunciation, when I am not on site. If I am at the event, I simply find someone from that country to ask.”

What is the best thing about being a commentator?
“Broadcasting some of the best moments of other people’s lives.”

What is Volleyball to you?
“It’s the sport that’s followed me since I was young and I wouldn’t have had half the life experiences I’ve had, without it. So my job is to try and give my passion back to Volleyball and help grow the sport.”

What are the three main things one needs to have if they want to work as a commentator?
1. Be prepared to get experience by working a lot as a volunteer and get used to public speaking.
2. Don’t be scared to make mistakes.
3. Be yourself and show your character.